the Fenix PD35 flashlight is destined to continue to be one of Fenix’s most popular models. With vastly improved performance, the new PD35 V3.0 can blast an amazing 1700 lumens a total distance of 1,171 feet. (357m). The PD35 V3.0 is powered by a single 18650 rechargeable battery (included)

Version 3 of the Fenix PD35 flashlight is destined to continue to be one of Fenix’s most popular models. With vastly improved performance, the new PD35 V3.0 can blast an amazing 1700 lumens a total distance of 1,171 feet. (357m). The PD35 V3.0 is powered by a single 18650 rechargeable battery (included), or can operate on two disposable CR123A’s.  This flashlight has a runtime of 230 hours when using the 5 lumen Eco mode. Boot-up battery level indicator lets you always know the battery’s status. On/off and momentary on are activated with the tail switch and six lighting modes are selected with the side switch. Compact and built-tough with an IP68 dustproof and waterproof rating, this flashlight is perfect for just about any outdoor or work activity.

Intelligent Memory Circuit
The light memorizes the last selected output excluding strobe. When turned on again the previously used output of general mode will be recalled.

Warning: Do not mix batteries of different brands, sizes, capacities or types. Doing so may cause damage to the flashlight or the batteries being used.

* 18650/ 16340 Li-ion batteries are powerful cells designed for commercial applications and must be treated with caution and handled with care. Only use quality batteries with circuit protection will reduce the potential for combustion or explosion; but cell damage or short circuiting are potential risks the user assumes.

Battery Level Indication
Each time the light is turned on the indicator in the functional side switch will indicate the battery level and will last for 3 seconds.

Low-voltage Warning
When the voltage level drops below the preset level, the flashlight is programmed to downshift to a lower brightness level until Eco output is reached. When this happens in Eco output, the battery level indicator blinks red 3 times every 10 minutes to remind you to recharge or replace the battery. 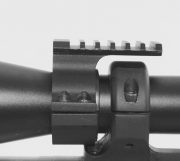 The Aria quick release torch gun mount ( Bottom Only ) has been specifically designed to effectively mount onto any 30 or 25mm rifle scope.

The Fenix AER-04 tactical remote switch is the perfect accessory for your rail mounted flashlight. This remote switch allow you quickly select momentary on  with the pressure pad or constant on with the tactical switch. Easily attach your remote switch either by cable ties or the hook and loop backer (both included). IP68 rated dustproof and waterproof underwater to 2 meters.

HL32R is a rechargeable outdoor headlamp with high performance and super convenience. It features five output levels plus red light and SOS. With built-in 2000mAh Li-polymer battery, it delivers a max output of 600 lumens and a max runtime of 200 hours. In addition, the headlamp supports Micro USB charging, with the charging and battery level indication, making it more easily operated. Dual switches separately control general mode and functional mode, IP66 rated protection, reflective and sweat-channeling headband, HL32R is the most eco-friendly and reliable headlamp for hiking, camping and mountaineering.